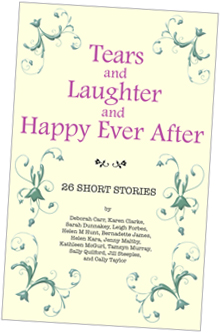 Tears and Laughter and Happy Ever After is a vibrant and varied collection of stories from writers who between them have had hundreds of short stories published in women’s magazines in the UK and around the world! Contributors have also won or been placed in dozens of competitions, published novels and written non-fiction for many UK magazines.

As the title suggests, the twenty-six stories encompass the dizzying heights of happiness, the heartbreaking depths of sadness and every emotion in between. Within the pages of this book you’ll meet a housewife with a surprising secret, a beekeeper with a problem and an undertaker with something unusual on his mind. You’ll also encounter angels, ghosts, aliens and many other intriguing characters. And, in the end, you may just find the path to happy ever after.

The idea for this book came from the successful ‘A Story A Fortnight’ writing group which brought the writers involved together in a project that has inspired and supported them in their short story writing.

Who’s been up to ‘Monkey Business’?

What’s happening in ‘The House At Summer’s End’?

Who is ‘The Girl In The Yellow Dress’?

If you want to know, you have to read Tears and Laughter and Happy Ever After.